On April 6, 2017, Common Voices partnered with the National Fire Sprinkler Association and fire chiefs from across the nation to share information about the Fire Sprinkler Incentive Act (H.R. 1481/S. 602). With teams that included advocates, paired up with fire sprinkler industry leaders, and fire service leaders, the groups met with key legislators to explain the true cost of fire in America. Every year, more than 3,000 people die, 100 firefighter line-of-duty deaths occur, and over 18,000 are injured. The direct property damage caused by fire os over $11.5 billion, and the indirect costs, such as lost economic activity, are over $107 billion.
Current building codes require fire sprinklers in many of the most vulnerable occupancies like student housing, residential and commercial high-rises, and entertainment complexes. The problem, however, is there are thousands of structures that were built and put in service before building codes required fire sprinklers.
The primary challenge to retrofitting these structures is the Internal Revenue Code. Under current depreciation rules, building owners have a strong disincentive to invest in a fire sprinkler system given the 39-year depreciation schedule for commercial buildings and 27.5-year schedule for residential structures. 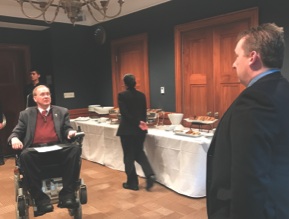 The Fire Sprinkler Incentive Act (FSIA) will provide a financial incentive to high-rise building owners to install fire sprinkler systems by reducing the depreciation schedule from 39 years to 15 years. This reduction will also put sprinkler improvements more in line with current tax code that allows 15-year depreciation for leasehold improvements. The Section 179 tax treatment would allow small- and medium-sized businesses to fully expense certain types of equipment purchases like machines, equipment, vehicles and computers. Fire sprinkler systems are not currently considered and 179 property and this legislation wold make them eligible for 179 tax treatment. A highlight of our Legislative Day was when Congressman Jim Langevin spoke with our teams and thanked us for making our annual trek to Capitol Hill. He explained that this type of grassroots outreach was very helpful and went a long way in helping other policymakers understand the reason they should sign on as co-sponsors of the life-saving legislation. Rob Feeney, survivor of The Station Nightclub fire, also added to the special luncheon by thanking Congressman Langevin for his leadership and years of steadfast support.
Let this be the year that we see tax reform that includes an incentive for fire sprinklers! Working together, uniting our voices…we are getting there!
Jenna Pritchett2017-06-19T15:10:03+00:00