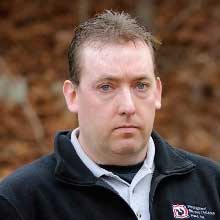 “I was burned on February 20, 2003, while attending a show at the Station Nightclub in West Warwick, Rhode Island. Pyrotechnics that were set off by the ‘80s band, Great White, caused polyurethane foam used as soundproofing to catch fire. The building was quickly engulfed in flames, ultimately killing 100 people and injuring well over 200 others. My fiancée, Donna Mitchell, and two other friends, Mary Baker and Pam Grudadauria, were among the victims. Another friend, Kathy Sullivan Pelchat, survived but with severe burns. I was hospitalized for a month and spent 12 days in an induced coma with inhalation burns and burns to my hands, face, and shoulder.

Early on in my recovery, I was introduced to the Phoenix Society for Burn Survivors and first attended the organization’s annual World Burn Conference in 2003. Along with learning the tools I needed to rebuild my life as a burn survivor and become comfortable rejoining society, I was taught how to become an advocate. One of the main focal points of the advocacy training I received was to fight for fire sprinklers in high-risk occupancies, such as nightclubs, to prevent another deadly fire like the Station Nightclub fire from happening again.

While at one of the World Burn Congress events, I attended an educational session about fire sprinklers facilitated by Shane Ray, then fire chief of Pleasant View, Tennessee, and Vickie Pritchett, who were there on behalf of FireTeam USA. Later, Vickie called me and asked me to testify in front of the city council in Chattanooga, Tennessee, to get the city’s nightclubs retrofitted with fire sprinklers. Through my testimony the measure passed and I since have continued my fire sprinkler advocacy efforts nationwide.

History has proven time and time again that one common denominator in prevention was missing in tragic fires – fire sprinklers. Had the Station Nightclub been equipped with a fire sprinkler system, there would have been zero deaths and most likely zero injuries. Many fires in high-risk, high-occupancy buildings that resulted in multiple deaths could have been prevented had there been fire sprinklers. Thousands of lives are lost each year to fires. Whether in a home or business, a fire sprinkler system gives the greatest chance of survival and can save the lives of those thousands of people each year.”