May 7, 2015 – Press release courtesy of the Wisconsin Chapter of the National Fire Sprinkler Association: 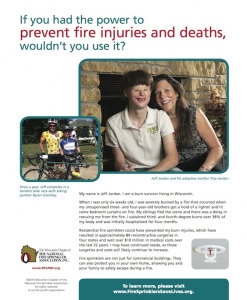 The theme of the PSA is “If you had the power to prevent fire injuries and deaths, wouldn’t you use it?” It aired on WTMJ-AM during Fire Prevention Month in October 2014. Jordan describes his burn incident as a six-week-old infant. His unsupervised three- and four-year-old brothers got a hold of a lighter and lit some bedroom curtains on fire. They fled the scene and there was a delay in rescuing Jordan from the fire. He sustained third- and fourth-degree burns to over one-third of his body and was initially hospitalized for four months. He has since had over 84 reconstructive surgeries, totaling well over $10 million.

Jordan, now 22 years of age, is an advocate for home fire sprinklers. He believes his PSA for the NFSA-WI is a rare opportunity to spread his message of fire safety.

“My burn injuries have been a part of nearly my entire life, but they do not have to be a part of other people’s futures,” says Jordan. “There is tremendous value in home fire sprinklers and the lives that can be saved by them. This PSA was an amazing opportunity and I am glad that my story can have an impact on others – whether helping someone through a burn injury of their own or helping others be smarter about fire safety and avoiding preventable fires.”

In addition to taking online college courses, Jordan travels the country to share his inspirational and motivational messages through various speaking engagements. Each summer he volunteers as a counselor at Wisconsin’s Summer Camp for Burn-Injured Youth. He also participates in activities with the national nonprofit Phoenix Society for Burn Survivors and recently became an advocate for Common Voices, an advocates’ coalition determined to create a fire-safe America.

Listen to the PSA at www.nfsawi.org/wp-content/uploads/2013/08/jeff-jordan-psa.mp3.